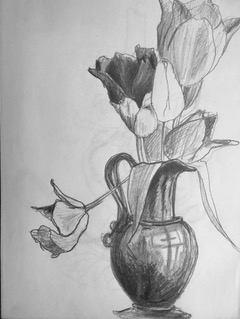 A dream visited me for years. It began at the age of 7

I’d enter a room with white walls. Large blue curtains covered the entire back of the room. Bright lights hung from a ceiling shining down on these blue curtains. Every time I had the dream I would awake confused and puzzled. I had never been to such a place and had no idea what it could mean.

My first connection with the name UTA HAGEN was during my junior year in high school. Mister Andrew Hamady brought in an album to the SPEECH AND DRAMA class. I can still see the way he held it’s cover in both hands as if it was something rare and precious. He said, “Today we will be listening to a play, WHO'S AFRAID OF VIRGINIA WOOLF.”

Two guys sat behind me playing mumbly peg with a switchblade. I should have been distracted but still I recognized a seminal moment in my life.Mr. Hamady put the needle to vinyl and I heard Uta’s voice bray her first lines as Martha. I said to myself “That woman is telling the truth.”

As a teenager, I took a summer job working as a stage manager atCedar Point amusement park in Sandusky Ohio. During that summer, after years of trying to avoid it, I made the decision that my calling was to be an actor. I bought as many books as I could find (pre-amazon) written by acting teachers currently teaching in NYC. After reading RESPECT FOR ACTING I felt that the person who wrote this book was the best choice for me. There was something about the way Ms. Hagen approached being an actor that spoke to me.

From a pay phone inSandusky, Ohio I put coins in the slot and dialed. I heard a voice say “HBStudio.” With a shaky uncertainty I managed to utter, “ I would like to study with Uta Hagen.” A friendly voice replied, “When would you like to come in?”

I had called on the first day of registration.

In Arthur Miller’s play A MEMORY OF TWO MONDAYS, a young man working in a factory decides to leave his job and go to college. He has fallen in love with the people he works with. They’ve become a family to him and he is having a hard time tearing himself away. This was what I chose for my audition.

I used Ms. Hagen’s book to work on the material, choosing object exercises that I thought would pertain such as TALKING TO MYSELF. I read the chapters on rehearsing and used them as my guide.

I had been working in an art studio for almost two years in NYC before I decided to take on the actors life and I, just like the young man in A MEMORY OF TWO MONDAYS had a hard time leaving those people who I had become so close to.

First, I had to audition for a woman named Alice Spivak who was screening people and deciding who should go on to meet Ms. Hagen. After auditioning for Alice, she gave me adjustments and asked me to incorporate them before I did the piece for Ms. Hagen.

The audition was run with extreme efficiency. Hopeful actors filled the hallways. I was guided from one room to the next and ended up sitting on a bench in front of a door with a red light on the side of it that let us know not to make noise while those inside were working. Alice sat with me as I waited. This was the door to Ms. Hagen’s legendary classroom. I would later witness acting students shaking and vomiting out of fear as they waited to present their scene.

The red light shut off and the door opened. As the actor before me was leaving, Alice got up and went into the room to give Ms. Hagen an index card with my name and info on it. As I followed behind, I recognized the room immediately. It was the white room with the blue curtains of my dreams.

I set up my space as Alice taught me to and as Bert from the play I began clearing out my workspace on my last day at the factory. I began by asking myself the question, “I DON”T GET IT. HOW IS IT ME THAT GETS OUT?”

Afterwards, I felt odd. I didn’t quite know what had just happened. I didn’t feel as if I was acting and had no idea how to judge what I had just done. As I gathered my things to leave, I looked towards Ms. Hagen who put the hand with out the cigarette in it to her mouth and blew me a kiss.

I found myself walking the streets of Greenwich Village with a bag of props. It was the strangest feeling. I had a deep sense of being alone. I was confused. I did not feel that my audition or meeting with Ms. Hagen went badly, yet I did not feel elated. I couldn’t relate what I was feeling to what had just taken place. I walked for hours not sure of what I was feeling, or why.

Weeks went by and I did not hear back. At the audition, I was told that letters would be sent out either inviting me into the class …or not.We were asked not to call the office. The day before class was to begin I still hadn’t heard and I couldn’t take it anymore. I called and told them I had not received a letter.

The person on the other end of the line said that the letters had been sent out but she could check to see if my name was on the student roster.After a long silence I heard, “Yes, your first class is tomorrow morning.”

The next day, arriving back to the apartment after my first class,I opened my mailbox to find the letter waiting for me.

Years of hard work, first in class and then professionally, helped me realize why I felt the way I did after that audition and why it was successful enough for Ms. Hagen to accept me into her class at such a young age.

I didn’t feel like an actor. I felt like a human being. All the messy feelings that come with being human followed. I’m sure one of the reasonsI wanted to become an actor was to escape my family life. But on that day, I faced my fears in order to share real human behaviors and emotions that come from working this way.

I found the courage to reveal a deep conflict stemming from the fact that I, Victor, had left home at an early age. Leaving behind those I loved in order to fulfill a deep need to start a new and better life.

Leaving my family, friends and all things that were familiar tome was terrifying. I had instinctively tapped into parts of myself that expressed what Mr. Miller’s creation Bert was going through. Like Bert, I was jumping off a cliff into the unknown in order to become what deep down I knew I was meant to do with my life.

She saw that in me and she understood.